It’s convention time again folks! What better way to kick it off than with a brand new one out of San Jose, Silicon Valley Comic Con presented by Steve Wozniak; you know, the other guy who created the first Apple Computer. SVCC brought together America’s two greatest superheroes: Pop Culture and Technology. One minute you’re walking the floor buying Funko Pops, getting a drawing from your favorite artist, next you turn a corner and you’re chatting with affordable 3D printing companies and the latest apps for your phone to get your emoji’s to make noise! 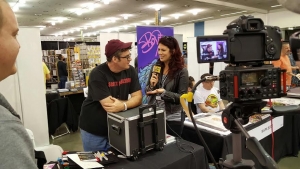 SVCC didn’t make you feel like they were a first year con. They were super organized using the new wristband technology, as well as their their all-star powered guest for the weekend The cast of Back of the Future reunited at SVCC and the line to get a photo with Christopher Lloyd was insane! Nathan Fillion and Alan Tudyk were just as great as ever while signing autographs, taking photos, and promoting their co-created comic book  Spectrum. If you want a chance to pick up a copy and possibly meet the fellas, check their schedule for Free Comic Book Day coming up in May.

My favorite thing to come out of SVCC, besides my amazing Rogue Metal Artwork, is the news of The Legion M. If you don’t know what that is, you will. The Legion M is going to be the first FAN OWNED production company. Partnered with Stoopid Buddy Stoodios, Meltdown Comics, 42 Entertainment, and Animal Repair Shop they will be bringing us the content that you, the shareholder, wants to see and can invest in. Fan response/demand is what brought Deadpool to fruition!! This is amazing news! I was actually able to sit down with the guys and ask them more information about this project, and I’ll post it when it it goes up on That Hashtag Show.

What a great warm up for the crazy head. Next up, Wondercon!